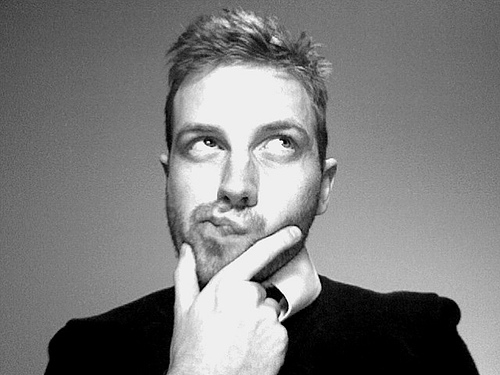 The church is led not by leaders but by Christ. The head of the church is Christ. Everyone else is a follower. Leadership has led us to the place where everybody is trying to get everybody else to do something, and no one ends up doing anything. Leonard Sweet, I Am a Follower.

To Lead or Not To Lead? Nine blog sessions thus far.

All geared toward uncovering the scandal behind the ever-so-popular church-wide action word: ‘leadership’. A quick search for Christian leadership books on Amazon.com results in a mere 15,493 titles. Overkill? One might think so, but when we add in the 20,394 secular titles with ‘leading’ in their titles, 47,990 with ‘lead’, 53,972 with ‘leader’ and a whopping 71,745 with ‘leadership’, we’ve got a lot of reading to do when it comes to becoming a great ‘leader’ for Jesus!

Interesting, isn’t it? Our culture is consumed with the subject of leadership, but from what I’ve found in my research, the New Testament writers thought very little of the word. And, to be honest, the other words associated with the concept of ‘leadership’, (like ‘lead(s)’, ‘leader(s)’, ‘leading’ or ‘led’) don’t get very much attention in the New Testament either! 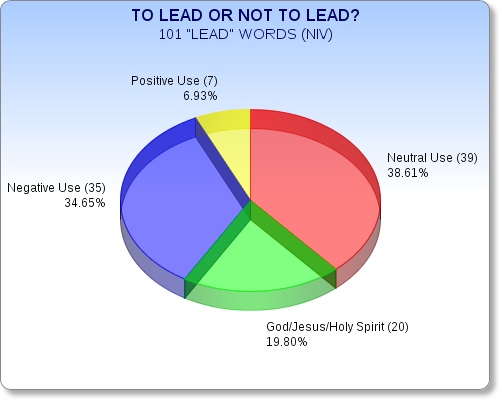 Think of it. There are only 7 times in the New Testament (NIV) when an author records a positive thought about one of us human beings serving as a ‘leader’ leading a group of assembled people called the church. Now as I said in an earlier blog, there are 20 times that the New Testament records God, or Jesus, or the Holy Spirit as being our ‘leader’, but alas, only a scant seven times anyone in the New Testament chooses a Greek word that alludes to any of us ‘leading’ the church of Jesus Christ.

As we discussed in blog session #8, there are 4 key passages from the New Testament that the church has called upon for two thousand years to address explicitly the qualifications and titles associated with church ‘leadership’. These passages are 1 Timothy 3: 1-13, Titus 1: 5-9, 1 Peter 5: 1-4, and Ephesians 4:11-13. Here we find nine interesting words that certainly can give us a great start in re-defining the role and job descriptions for those who sense a call to ‘lead’ the church of Jesus Christ.

Let’s begin here. Nine biblically-based words, taken from four key NT passages. Words we just might consider for increased use as we attempt to re-define ‘doing leadership’ in our American churches:

So there you have it. Nine New Testament words that, I believe, would go far in re-defining the role of ‘leader’ in the American church. For those of you who are still keeping score, let’s compare on a chart (see below) the 7 positive NT ‘leadership’ references with the 160 positive occurrences our 9 words we just discussed appear in the New Testament.

Just think how different American church might become if all the ‘leaders’ resigned and we allowed God to re-define our roles based on these nine rich words taken from the New Testament. I feel a breeze of fresh wind even as I say it.

But I’ve saved the best word for last. Come back next time and we’ll explore that one New Testament word that stands high above all the others when used to best describe the qualifications of a man or woman who desires to serve God and His church.

(For those of you who are wanting to look under the hood on the “word” statistics I’m presenting in this blog series, click here for all of the biblical references we refer to in this post)

My prayer: Father God, there are nine unique words found in the New Testament that describe the work of leadership: overseer, deacon, elder, shepherd, apostle, prophet, evangelist, pastor, and teacher. These words seem to best describe the role of leaders in the first century. Holy Spirit, blow new life into these ancient words, making them fruitful, once again, in our generation. For Your name’s sake. Amen.

My questions to ponder: So, what might it look like for us to put away the modernized concepts of successful leadership and replace them with the biblical definitions of overseer, deacon, elder, shepherd, apostle, prophet, evangelist, pastor, teacher? What needs to change in my thinking and actions to align myself more with these ancient words?

So, what is God speaking to you today as we ask the question, To Lead Or Not To Lead?

As I see it, something needs to change in the way we define ‘successful’ Christian leadership. And the question today should not be, ‘Do we need leadership?’ but rather, ‘What kind of leaders is God asking men and women to be? Over a four-week period, you and I will take a deeper look at this question. In order to keep all the blog sessions organized, we suggest you bookmark our To Lead Or Not To Lead? home page for ease of use. ENJOY!

Click here to go on to the next session…