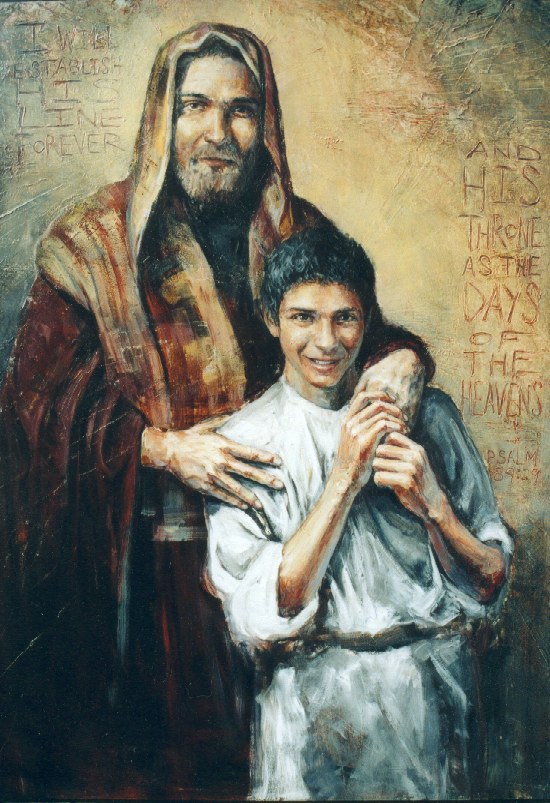 Master, why have You forgotten me?

Do fatherly dreams mean nothing to You now?

Don’t You see how You’ve etched my life in stone,

Carved in time for all to see?

Yet tonight, it all seems for naught.

Mary, Your gem, given to me by the Creator’s hand.

All because of a belief in what she has been told.

How, my Lord, will I continue with this journey?

A cornerstone now discarded by its Maker?

Do I count my loss, move on to another rock unturned?

My heart crushed, my hope deferred, my life unsure.

I know You to be a fair and just Father.

True and right in all Your ways.

My hope was to be just that to my children.

Do I now find myself building with someone else’s son?

Be for me, this day, my Solid Foundation.

Firm as the rock beneath my feet.

Unshakeable as the sun, moon and stars above.

Lead on, my Father, Your loving son will trust and follow.

Many times, in the gospel stories surrounding the life of Jesus of Nazareth, we tend to overlook a man who played such an important role in the life of our Master. His name is Joseph of Nazareth. A chosen son of God who stepped in, on behalf of God the Father, to be the ‘hands-on’ father to a young man growing up in a very fallen world.

We know very little about this one who came alongside Mary, the mother of Jesus. We’re introduced to him ever so briefly in two of the Gospels. Matthew tells us the most. Luke fills in a bit more. We know him to be a man who lived his life in such a way that honors both his God and the young woman he loves. In today’s society, where we so often find influential men treating women with little, if any, respect, Joseph stands out as a real man carrying a true passion to follow his God, while fully supporting the mother of his ‘adapted’ son.

Tradition tells us that Joseph, the earthly father of Jesus, was a carpenter by trade. This line of thought can be traced back to one of the earliest church historians, Justin Martyr, who mentions in his writings (mid-2nd century) that Jesus was a worker in wood, building yokes and plows like his father did before him. By 200 C.E. Origen, another prolific church historian disputes that claim, believing neither Jesus nor his father, Joseph, were wood workers, basing his argument on the actual text of the New Testament. You see in Mark’s gospel (6:3) and Matthew’s gospel (13:53-55) English Bible translators incorrectly took the Greek term tektōn (pronounced as “teck-tone”), from which we derive such words as technical, technician, tectonic, and architect, and translated it as “carpenter.” In truth, while a tektōn could be a carpenter, the Greek word simply means “skilled craftsman,” “artisan,” or “creative builder,” and biblical scholars now believe that the most likely occupation for business-minded craftsmen living in 1st century Nazareth would have been workers in stone, not wood!

Might Jesus have lain these stones inside a ritual Jewish bathing pool in Sepphoris?

First of all, most structures in this time period were made of stone and mud, while wood was a rare commodity reserved primarily for the wealthy. Secondly, historians have now found that in the years immediately following Jesus’ birth, there was a major rebuilding project going on just four miles outside the sleepy little village of Nazareth. Sepphoris, a major Galilean town at the time, had been destroyed in the wake of the death of Herod the Great, and his successor, Herod Antipas, wanted to rebuild it to honor his Roman overlords. Literally a new, shining white city on the hill was visible from the valley in which the village of Nazareth was located. And if Joseph, Jesus, and his family members had anything at all to do with the building industry of Nazareth, it is a virtual certainty that they would have spent a significant amount of time working in Sepphoris. And here’s the clincher. The buildings in Sepphoris (see attached pic) were not made of wood…but stone!

So, there you have it, folks. Chances are, our stereotype of Joseph and Jesus being carpenters just can’t stand up to the historical suggestion that Joseph was, indeed, a well-trained, skilled craftsman in stone, and during his years of growing up in Nazareth, our Master, Jesus of Nazareth, cut his teeth on the fine art of stone-cutting as well!

Thank you, dear Joseph, for your skilled work and diligent response to God’s invitation to become the “earthly father” of our Master, Jesus of Nazareth. A job well done, indeed!

Thanks as well to B. Scott Christmas, Jesus’ Occupation: Was Jesus a Carpenter?