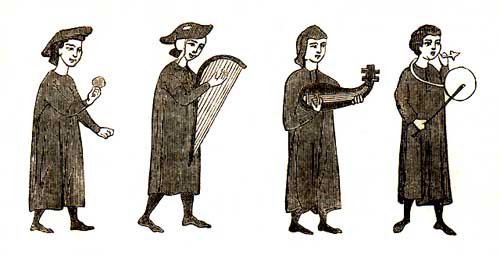 The truth is that King David had quite the reputation for being a melodic rabble-rouser. One who was not embarrassed by his lively worship of God. A leader who had a way of stirring up the passion of the masses when it came celebrating Yahweh.

In 2nd Samuel, chapter 6, verses 12-23, we’re told of the time when King David brought the Ark of the Covenant back into Jerusalem. From all the accounts, it was quite the party. With every six steps there would be a halt to the parade. There, the priests would sacrifice a bull or calf, shouting high praises to their high God.

In the midst of this extravagant celebration, King David decided to remove his weighty robes, stripping down to his outer underwear! The Scriptures tell us that the King danced before the Lord with “all his might” while the people of Israel shouted amid the blast of trumpets.

When questioned later by his embarrassed wife why the King decided to strip down to his skivvies, singing and dancing before the Lord with such gusto, David replied that when it comes to his passionate worship of God, he would be willing to become even more undignified than this! Apparently, the Scriptures wisely decided to edit out any further public embarrassments King David might have had during his private worship times!

About two thousand years after the life of King David, there was another godly leader who took on the title of Musical Rabble-Rouser for God.

His name was St. Francis of Assisi.

In his youth, Francis was very influenced by the French troubadours who came through town singing, dancing, and performing acrobatic tricks. G. K. Chesterton in his Life of St. Francis suggests that this is why Francis nicknamed his order “The Jugglers of God.” (The official name was The Friars Minor, or The Little Brothers.) Chesterton says that one of the tricks of the troubadours was a handstand and that we can well imagine Francis performing a handstand for the Virgin Mary.

It was customary for local villagers to know when Francis and his band of Little Brothers were coming into town. It was said that everywhere these Franciscans went, they were heard singing high praises, joyfully hollering Hosannas with every step they took.

Makes me wonder if we quiet and reserved Christians are missing something here? While I might be too old and fat to do a handstand for Jesus, maybe I could be just a bit more bold with my joyful praises to God. The scriptures command us to make a joyful noise unto the Lord, don’t they?

Maybe it’s time to lay down our embarrassment and follow in the footsteps of these undignified troubadours of the past, hollering some Hosannas and singing out some Good News, for His Name’s sake!

My prayer: Lord, these stories of unashamed rabble-rousers for God stir me to take off some of the weighty robes of religion that might be holding back my high praises of You. Free me from such burdens and allow me the liberty to join in a celebration of Your mighty power and strength. For Your name’s sake. Amen.

My questions to ponder: So what weighty robes are keeping me from hollering Hosannas or singing out some good news for Jesus? Is it a fear of man that keeps me quiet? Is it a fear of public embarrassment that shuts me up? What needs to change inside me to make me into an undignified troubadour for Christ?

Over a 50-week period, you and I will take a deeper look at The Psalms: God’s Songbook of Prayers. In order to keep all the blog sessions organized, we suggest you bookmark our Contemplating the Psalms home page for ease of use. Keep in mind that one of the best ways to explore the on-going applications of this blog series is to walk alongside a biblically-based, Christ-centered spiritual director who is familiar with how to make material like this part of your overall spiritual formation in God. Many of our directors in our Sustainable Faith-Heartland network are available to companion you in your journey with Jesus. Click here for more info.