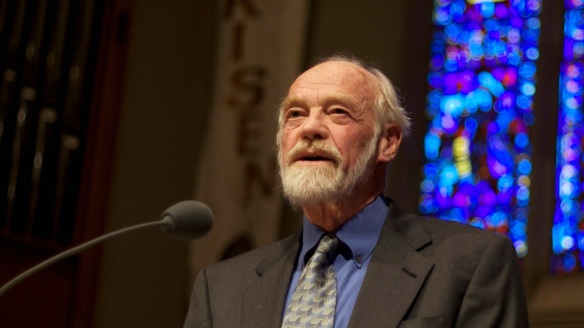 Back in the fall of 1981, my mentor and good friend, Pastor Bill Hanawalt, brought together a handful of men for a weekly bible study. These friends that Bill brought together were an interesting mix indeed. Some were students at Northwestern University. Some were successful business folks in the Chicago area, and a couple of guys were blue-collar tradesmen. And then there was me. A 30-year music major who had lost his job as a band director just a few years earlier, and now I had a new gig managing a Christian bookstore in Evanston, the city in which we all lived. Quite honestly, I’d never been invited to be in a bible study like this before. As I remember it, we met at 6:30 AM in the church office, located on the second floor above a retail shop near the corner of Main and Chicago in Evanston.

At the first gathering, Bill opened us up in prayer and then said, “Hey guys, I’m really being blessed by this new book I’m reading, and I’d like to invite you to join in a conversation with me as we go through the book together.” One guy piped in right away, “Does it have pictures?” We all chuckled, but in all seriousness, none of us were heavy-duty readers like Bill, who had graduated with honors from Yale University and Trinity School of Divinity. As I mentioned, at the time I was the retail manager of the Logos Christian Bookstore in Evanston, but just because I ran a bookstore didn’t mean I was the most avid reader on my staff. I gulped as Bill leaned over to pull the book out of his briefcase. “So, what’s the book, Bill?” I asked.

“It’s A Long Obedience in the Same Direction: Discipleship in an Instant Society by Pastor Eugene Peterson,” Bill said. “It’s a study in the Psalms…the Songs of Ascent, actually.” We all nodded, but quite honestly, I don’t think any of us knew what that meant. Bill, probably noticing the blank stare on my face, added quickly, “Psalms 120-134…you know the Psalms written for God’s people as they made their annual trek up to Jerusalem.” Again, we all nodded, but I’m guessing none of us knew much about the songs Jewish folks sang over 3,000 years ago!

“You can probably get a pretty good price on ‘em for us, can’t you, Marty?” Bill asked with a smile. Bill volunteered at our bookstore on a weekly basis and he knew I could probably get these $7.95 paperbacks from InterVarsity Press for less than $5 each. I nodded and within a week, everybody in the group had their fresh $5 copy of Peterson’s book.

I still recall sitting in that church office with Bill and that handful of men and feeling God’s Spirit tug at my soul. I felt very clearly during that season of time (1981-1982) God wooing me into a life of service, dedicating myself for God’s holy purposes. And while I wouldn’t have been able to tell you then what I know now, it was God calling me to a lifetime of “long obedience in the same direction.”

It was announced in the early afternoon on October 22nd that Eugene Peterson, author of The Message Bible and over 30 other books, including A Long Obedience in the Same Direction, passed from this life to the next. An article released by Christianity Today, announced Peterson’s death under this banner…

I saw that banner and the corresponding picture of Pastor Eugene and began to weep.

You see, from 1981 until today, 37 years in total, there have been two amazing pastors in my life. One I had the opportunity to spend limited time with (John Wimber) and one, I never, sadly, met at all (Eugene Peterson). One was used by God to initiate and shape my call to ministry (Wimber), the other to redefine and redeem it when it was nearly gone (Peterson).

I’ve written much over the years about the influence John Wimber had in my life (see my Wisdom of Wimber blog and book) but quite honestly, I simply haven’t written nearly enough about how greatly Pastor Eugene influenced me as well.

Long after A Long Obedience in the Same Direction stirred me in the early 80’s, I was working with Promise Keepers in the mid-nineties. My good friend and PK supervisor, Paul Walterman visited Iowa in the fall of 1997 and together we traveled around the Hawkeye state, meeting with men and encouraging them in the ways of God. At every stop, Paul would step up to the microphone, pull out his New Testament, and read a text. Each and every time he read from his Bible, I found my jaw dropping to the ground. The words were so fresh…so invigorating…so enthralling. Finally, I asked Paul, “Hey bro, what translation of the Bible are you using? Are you making this stuff up or what? It’s so amazing what you’re reading to the guys. It sounds like it was written exactly for the work we’re trying to do.”

Paul laughed, “Yup, Marty, I’d like to say I wrote it, but it’s Eugene Peterson’s version of the New Testament. It’s called The Message Bible.”

Hmm. Here I was, once again…16 years later and that name, Eugene Peterson, comes in,  front-n-center, impacting me in 1997 just like I was impacted by his writings so many years before. It wasn’t long before I was the proud owner of Eugene’s classic: The Message Bible. And as many of you know, I use it nearly exclusively in all of my As I See It blogs.

Fast forward another 12 years to 2009. We’ve just celebrated the 10th year of our Vineyard church plant in Cedar Rapids, Iowa. Things had been going well over the first decade. But now suddenly, just about everything that was going right the first ten years reversed itself and my church was facing struggles I’d never experienced before. I’ve written a lot about this season of transition, so won’t bore you with the details. But just about the time I was so depressed and feeling hopeless about the pastoral ministry, my pastoral coach suggested I grab a copy of Eugene Peterson’s classic book on pastoral ministry, The Contemplative Pastor.

From that season forward (in 2009 and following) I’ve become an avid fan of everything Eugene Peterson, even to the point of frustrating some of my friends! But folks, let me say it this way. When God uses a man and his writings to save your life and save the call on my life, how else should I respond? I, for one, will be thankful to Jesus for this man used of God to help and encourage literally thousands and thousands of pastors like me who probably would have given up on pastoral ministry if it weren’t for the writings of Eugene Peterson.

Now that you’re with Jesus, Eugene, might I say “Welcome Home, dear friend. Godspeed. While we will miss you and your ministry down here, I’m so grateful for the work you accomplished while you were here! Thank you, Eugene. Thank you!”

If you have a Eugene Peterson story…(and who doesn’t?)…I’d love to hear it. Pastor Eugene touched so many lives, and like me, you may never have had the opportunity to meet him, but his writings touched you deeply. Send ’em my way.

BTW: Author Winn Collier will be writing a biography on Peterson. Can’t wait to hear the story!

Here’s a great story by my good friend, Don Follis…

Click here to watch a video of the Memorial Tribute to Eugene Peterson.

2 thoughts on “A Long Obedience in the Same Direction: Thank you, Eugene Peterson, for making the journey with us.”