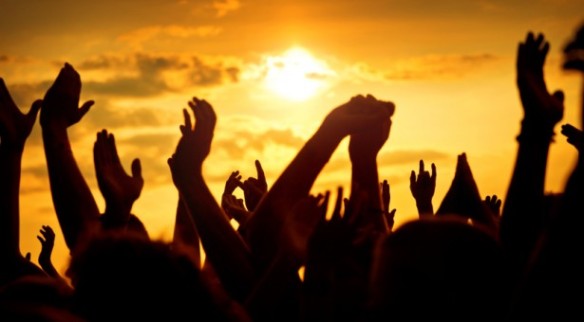 Today’s Reading: “I believe in God, The Father Almighty, Creator of heaven and earth. I believe in Jesus Christ, God’s only Son, our Lord. Who was conceived by the Holy Spirit, born of the Virgin Mary. Suffered under Pontius Pilate, was crucified, died, and was buried. He descended to the dead. On the third day, He rose again. He ascended into heaven. He is seated at the right hand of the Father, and He will come to judge the living and the dead. I believe in the Holy Spirit. The holy catholic Church.”

I remember one Sunday morning when I was a kid, sitting in the pew with my family, as the congregation was reciting The Apostles’ Creed. When we got to the part where it says…

I believe in the holy catholic Church…

…I leaned over to my older brother and whispered, “Hey Eric, I thought we were Presbyterian?”

Without a doubt, this part of The Creed has presented questions like this for so many over the years. Keep in mind that when The Creed was first developed, there was only one church and it was, indeed, the holy Catholic Church. But after the Reformation (five hundred years ago), The Creed had to be reworked a bit so that it could be used by Catholics and Protestants alike. And in all fairness, the word catholic (which means universal or diverse) was not inserted in the original Creed to be exclusive but to accentuate the amazing broadness and depth of the Church of Jesus Christ, not just in Rome but throughout the entire world as well.

So, what’s it actually mean to “believe” in the Church? Does it mean that the Church has become the fourth member of The Holy Trinity, coming alongside Father, Son, and Spirit as an equal partner?

Sadly, there have been times in church history where the institution has been elevated by its leaders to nearly that high of a place in the pecking order of God. And that’s one of the reasons Martin Luther and other reformers needed to address this overarching rule of the Church in the lives of those who follow Jesus of Nazareth.

The New Testament does speak to the importance of the Church, but a careful study of the text indicates that this institution should never be seen as anything more than a gathering of common people who share a common bond of relationship through their common faith in Jesus Christ as Savior. Remember…the word holy that’s associated with the Church here in The Creed doesn’t mean that we are better than others, but simply “set apart” for the purposes of God.

So, as I see it, when we say, “I believe in the holy catholic Church,” we are simply aligning ourselves with the millions and millions of men, women, and children who have, over the last two millennia, gathered in communities both large and small, in cathedral or home, to encourage one another in this beautiful faith-walk we call Christianity.

Sadly, there are way too many folks today who don’t believe in the Church anymore, saying that the Christian faith is a journey of the individual and that everything’s just fine, thank you, without all the clutter associated with church life.

Now, I understand that many have been hurt or let down by the Church, and I don’t want to pretend here that there have never been any stupid or ugly things done in the name of the Church. But I do want to remind you that the New Testament just doesn’t support a worldview where an individual Christian tries to live his or her faith outside the realm of a community of believers.

So, for what it’s worth, I say, yes, I still believe in the holy catholic Church, and may our prayer for the Church echo the prayer of Jesus, as found in the 17th chapter of John…

I’m praying not only for them (the first-century disciples), but also for those who will believe in Me because of them and their witness about Me. The goal is for all of them to become one heart and mind—just as You, Father, are in Me and I in You, so they might be one heart and mind with Us. Then the world might believe that You, in fact, sent Me. The same glory You gave Me, I gave them, so they’ll be as unified and together as We are—I in them and You in Me. Then they’ll be mature in this oneness, and give the godless world evidence that You’ve sent Me and loved them in the same way You’ve loved Me. (John 17: 20-23 MsgB)

And it’s the Church’s maturity in oneness, this one heart and one mind that makes a church worth believing in. And it’s this, we must address next time. I hope you will join us.

My prayer: Jesus, without a doubt, Your Church has accomplished much over the last two millennia for the cause of Christ. Yet it also has done much harm, spoken wrongly, and, many times, reduced faith into church attendance, collecting tithes and offerings, and building beautiful buildings so we can boast of having more than our brothers and sisters down the street. Holy Spirit, please come and answer the honest prayers of Jesus for His Church. For Your name’s sake. Amen.

My questions to ponder: Have I become one of those Christ-followers who call themselves part of “The Done’s,” no longer attending church, believing I can do this thing called Christianity by myself? How might I reverse that trend, choosing to participate with God in becoming a part of the answer to Jesus’ powerful prayer for His Church found in John 17? Am I willing to 1) believe in the holy catholic Church, and 2) offer my time, energy, and resources in re-making His Church in the image the Master is still praying for today?

So, what are you experiencing today as we are Contemplating The Creed?

Over a seven-week period, you and I will take a deeper look at The Apostles Creed. In order to keep all the blog sessions organized, we suggest you bookmark our Contemplating the Creed home page for ease of use.