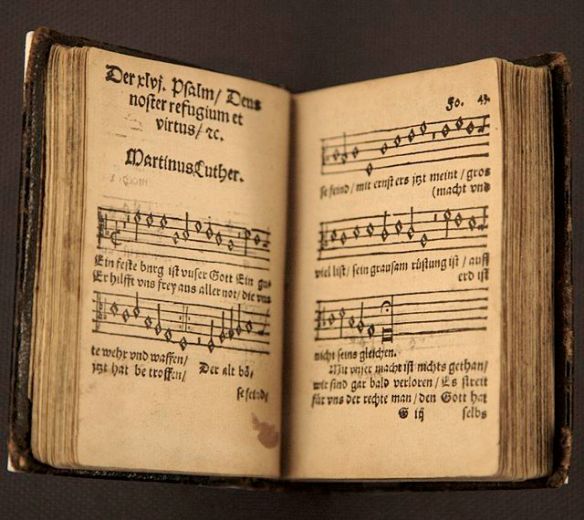 “The devil, the originator of sorrowful anxieties and restless troubles, flees before the sound of music almost as much as before the Word of God. Music is a gift and grace of God, not an invention of men. Thus it drives out the devil and makes people cheerful. Then one forgets all wrath, impurity, and other devices.” Martin Luther

I’m so thankful that our alphabetical list of the thirty greatest hymns of all-time begins with Martin Luther’s classic! What better way to start our blog series than by pondering on the words of this powerful hymn from 1529?

A mighty fortress is our God, a bulwark never failing;
Our helper He, amid the flood of mortal ills prevailing:
For still our ancient foe doth seek to work us woe;
His craft and power are great, and, armed with cruel hate,
On earth is not his equal.

Did we in our own strength confide, our striving would be losing;
Were not the right Man on our side, the Man of God’s own choosing:
Dost ask who that may be? Christ Jesus, it is He;
Lord Sabaoth, His Name, from age to age the same,
And He must win the battle.

And though this world, with devils filled, should threaten to undo us,
We will not fear, for God hath willed His truth to triumph through us:
The Prince of Darkness grim, we tremble not for him;
His rage we can endure, for lo, his doom is sure,
One little word shall fell him.

That word above all earthly powers, no thanks to them, abideth;
The Spirit and the gifts are ours through Him who with us sideth:
Let goods and kindred go, this mortal life also;
The body they may kill. God’s truth abideth still,
His Kingdom is forever.

A Mighty Fortress Is Our God, which is Luther’s paraphrase of Psalm 46, has been tagged by music historians as the “Battle Hymn of the Reformation.” Yet, after nearly five hundred years of popularity in Protestant congregations, the hymn has now found favor even in some Catholic circles, appearing in the second edition of the Catholic Book of Worship, published by the Canadian Conference of Catholic Bishops!

As I see it, Luther’s hymn has become a mighty fortress in and of itself. And as I ponder the powerful words that make up these four verses, translated from German into English in 1853 by Frederic H. Hedge, I consider it a true declaration of war. A line in the sand. A statement of good vs. evil. A rallying cry similar in tone to the brave words spoken by Joshua, when he was faced with a major decision on which way he and his family would go…

You see, following Jesus is not for sissies. In a society where being politically-correct is highly valued, Jesus of Nazareth is sometimes portrayed as a mild-mannered, peace-loving moderate who comes off more like the Dali Lama than the Son of God. Now, don’t get me wrong. On the other side of the aisle, there are way too many conservative Christians who see Jesus as the prototype for Ronald Reagan and George W. Bush. But enough about politics, let’s talk Kingdom of God here.

You see, Luther and the Reformers had to deal with the same problem we do here in the 21st century. It would have been easy for Luther to write a warfare song that exposed all the “evil” that was evident in his human adversaries of his time. He could have kicked and screamed against the ugly schemes of the medieval Catholic Church and written a war-song that “told the truth” about the many warts to be found in those who were speaking out against him. But, no…Luther chose correctly, to get his eyes off of the men and women who were speaking ill of him and focused instead on the true battle facing all of us. And while Luther does write about the Prince of Darkness grim…the great majority of this warfare song focuses on the greater glories of God, as revealed to us through His magnificent Christ!

Did we in our own strength confide, our striving would be losing;
Were not the right Man on our side, the Man of God’s own choosing:
Dost ask who that may be? Christ Jesus, it is He;
Lord Sabaoth, His Name, from age to age the same,
And He must win the battle.

And so, as we close this first blog session on the thirty greatest hymns of all-time, I suggest that we all note how Martin Luther masterfully speaks truth in love. Rather than rail against our “enemies,” I wonder how much more life we might speak into our so-often divided world if we took a cue from the Great Reformer and pointed more and more to the Mighty Fortress, focusing our words on Him, glorifying the Father, the Son, and Holy Spirit, whose Kingdom is for all and is forever!

My prayer: You, O Mighty Fortress, are everything I need both today and tomorrow. It’s You who hold the keys to life and it’s You who hold the verdict over good and evil. May I be found warring against the Prince of Darkness and his horde of demonic powers, not against my brother or sister. Thank You, Jesus, for the Spirit and the gifts, which indwell and empower us to live for the glories of Your Kingdom. For Your name’s sake. Amen.

My questions to ponder: So what will it look like for me to “let goods and kindred go” today? How can I love and appreciate this life God has given me, yet not allow this “mortal life” to control or manipulate me in such a way that I end up compromising with the advancing Kingdom of God?

So what is God speaking to you today as we ponder together 30 Great Hymns of Faith?